Tanzania
Help in the remote south

70% of the rural population
has no proper sanitary facilities.

60% of the rural population
has no access to clean drinking water.

524 mothers die
during pregnancy or in childbirth for every 100,000 children born living.

One in every four women
over the age of 15 cannot read or write.

In Tanzania, we provide aid in these areas: 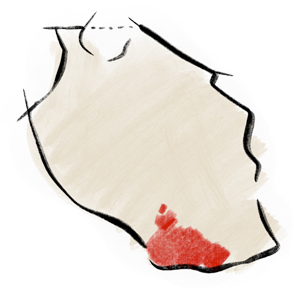 Tanzania
Help in the remote south

70% of the rural population
has no proper sanitary facilities.

60% of the rural population
has no access to clean drinking water.

524 mothers die
during pregnancy or in childbirth for every 100,000 children born living.

One in every four women
over the age of 15 cannot read or write.

In Tanzania, we provide aid in these areas:

The people living in the Tunduru district are almost all peasant farmers living in the most primitive conditions in clay huts. There is no municipal water supply. Surfaced roads, secondary school or the prospects of a job in trade or industry? Not a chance! The nearest towns have only been reachable via an asphalt road in the last few years.

Since 1996, wortundtat has played a major part in setting up the KIUMA project. KIUMA stands for Kanisa la Upendo wa Kristo Masihi (English: Church of the Love of Christ). The work done by the helpers here ranges from short-term support to the permanent development and transformation of the entire region. Specifically, KIUMA maintains establishments for health, education and communal infrastructure.

With its services, wortundtat is helping the region gradually to bring the standard of living up to that of the country as a whole. Even then, they will still be a long way from living a life of plenty: Tanzania is one of the poorest countries in the world: In 2020, it stood at number 163 out of 189 in the United Nations Human Development Index (Germany came in at number 6)

We support these services:

Health statistics for Tanzania contain some shocking figures: Out of every thousand newly born babies, almost 38 will die within the first year (Central Europe: around 4)* – and the figure is even higher in the Tunduru district. Average life expectancy is 63 years (Central Europe: around 80). Around 4.5% of the population is infected with HIV (around 1.5 million in a total population of 55.4 million). Malaria, hepatitis, tuberculosis and bacterially-related diarrhoea are amongst the commonest illnesses and can generally only be treated inadequately in the few medical facilities in the villages.

This is one problem. The other is the distance from the nearest doctor: There are hardly any medically qualified people in the region, and the nearest hospital is 70 km away from KIUMA – so it cannot be reached without a car.

Latest reports from our project in Tanzania 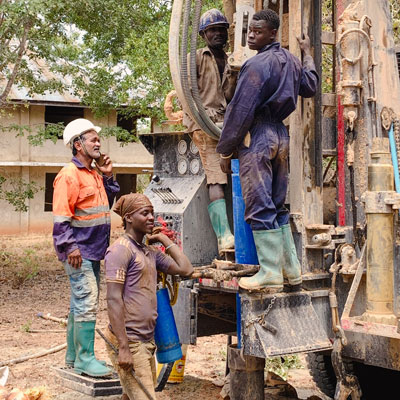 END_OF_DOCUMENT_TOKEN_TO_BE_REPLACED

Today, the hospital financed by wortundtat is the only medical care facility within reach; in comparison with other facilities considered normal in the country, it also offers modern medical standards. The focus is on treatments against malaria and respiratory disorders such as tuberculosis, plus the provision of care in the obstetrics ward. Patients are treated for a small payment – and those who cannot afford it receive the necessary medical care free of charge.

Doctors with various specialisms care for a wide range of old young and adult patients: The in-patient unit has around 100 beds for men, women and children. Here and in the outpatient centre, over 30,000 medical treatments and over 2,000 minor and major operations are carried out each year.

Many of the nurses have been trained in the nursing school that is also run by KIUMA on its own site. 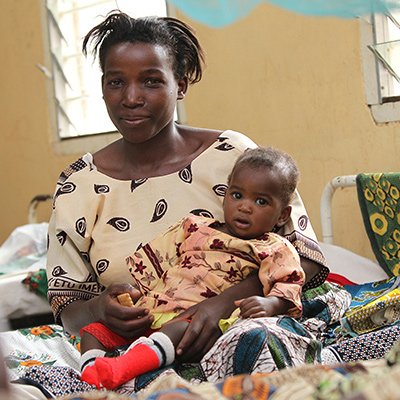 Women from the surrounding area can give birth safely in the KIUMA Hospital.

Health services – plenty of health for people who are sick 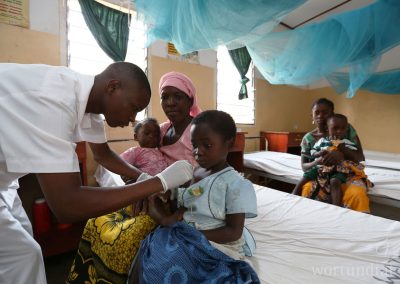 In Tanzania, it is normal for patients to be cared for by relatives. This is why most children can be found on the children’s ward with their mothers. 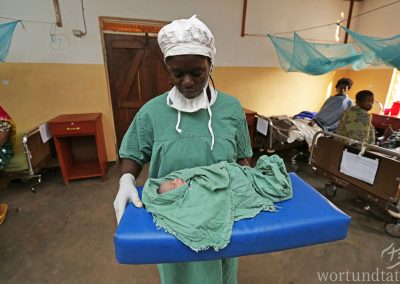 Difficulties in pregnancy and birth are frequent causes of death amongst women. Professional medical care lowers the risk for mothers. 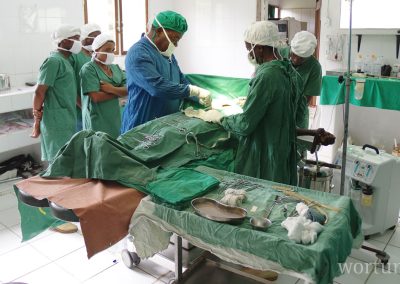 The KIUMA Hospital is the only clinic within a wide radius to carry out major operations in professional conditions. 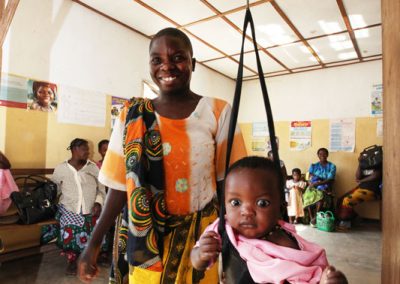 People come from the surrounding villages to the outpatient clinic for a wide range of examinations. Babies are also checked for healthy growth here.

The few secondary schools in the Tunduru district are in a poor state. People search in vain for training places for young people wanting to train for a career in trade or industry. The shortage of teachers is also a massive problem: Many vacancies in schools are unfilled because there is a chronic shortage of teaching staff.

Ever since KIUMA was founded in 1996, wortundtat has worked to improve the educational opportunities for the local population. Young people from the region have an opportunity to train. This increases the possibility that they might stay on in the region as skilled workers. It is a long-term process but – as observations after well over 20 years have shown – one which is obviously successful. 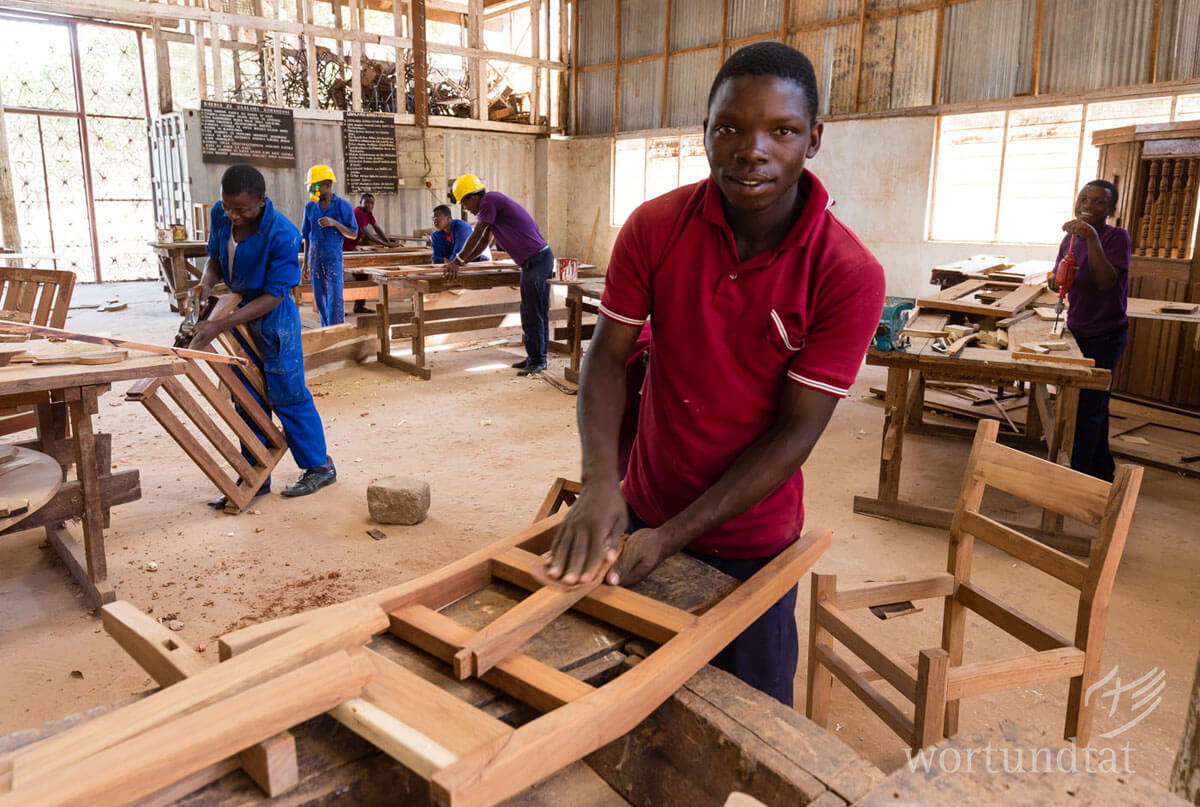 The young carpenters work for KIUMA while they are still in training.

Former students are teaching today at the KIUMA secondary school.

Around 800 male and female pupils continuously learn and live in the KIUMA secondary school, which is set up as a boarding school. At the beginning of 2010, the first senior class obtained their higher school certificates. Many classes have followed since then. The school is now famous far and wide, because its graduates, in a national comparison, obtain good results in their exams. And a few years after the first exams, former students have returned to the school to work there as teachers. 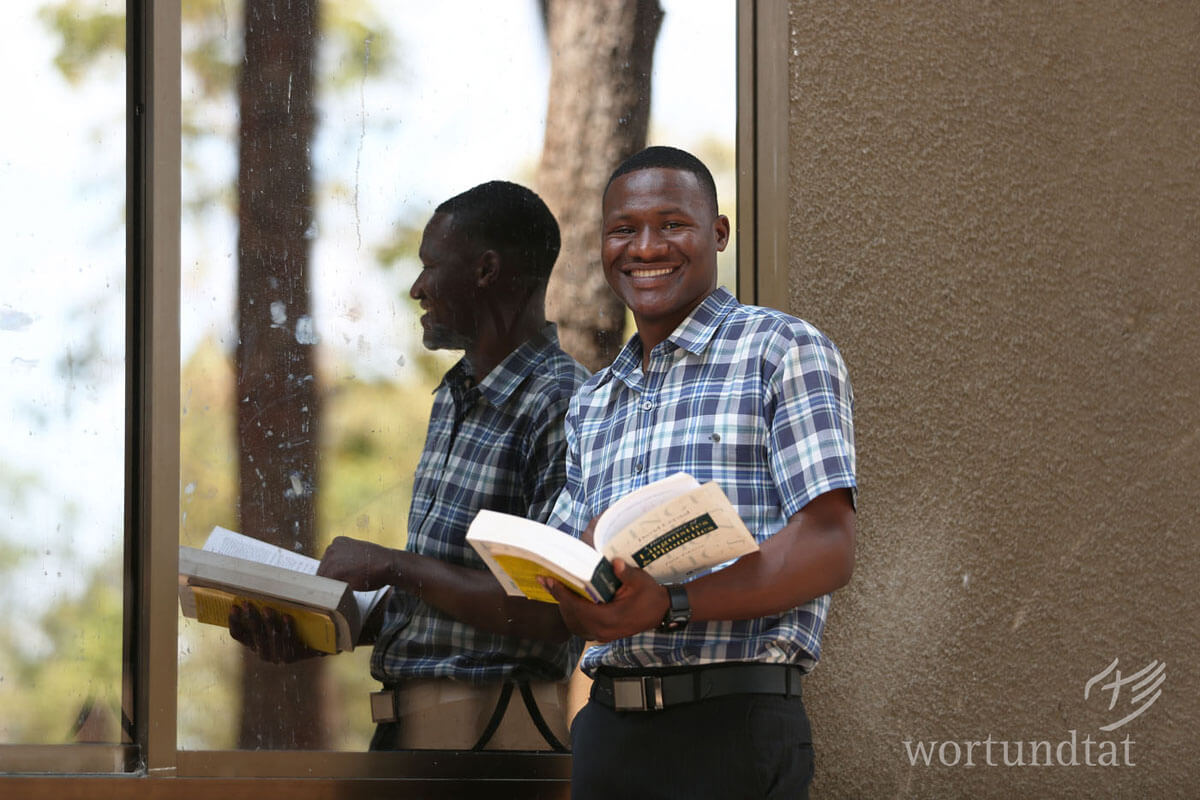 AAthumani Rashid is a teacher in the KIUMA secondary school. He also attended the school as a pupil. 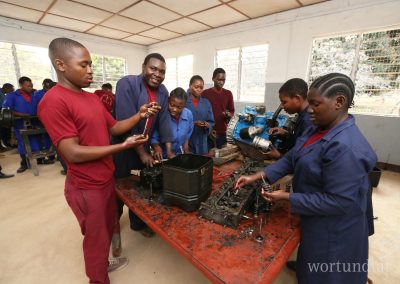 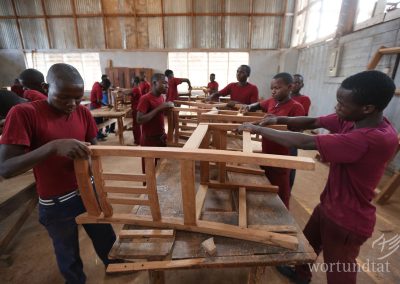 The chairs being built by the young men here will later be used in the KIUMA facilities. 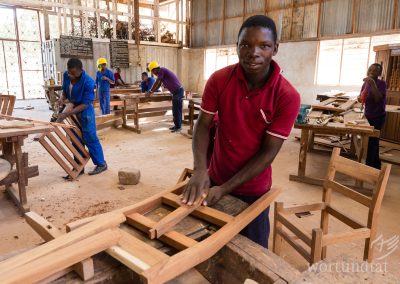 The young carpenters work for KIUMA while they are still in training. 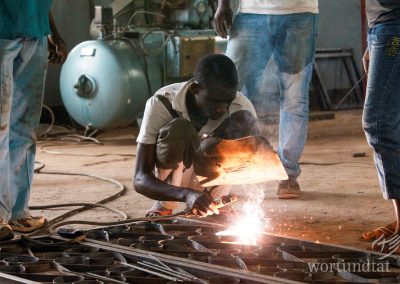 The window frames being made here will later be used in KIUMA’s buildings. 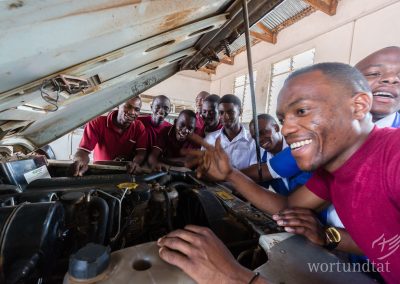 Cars suitable for off-road use driving are used in the region. The young men obviously enjoy repairing these. 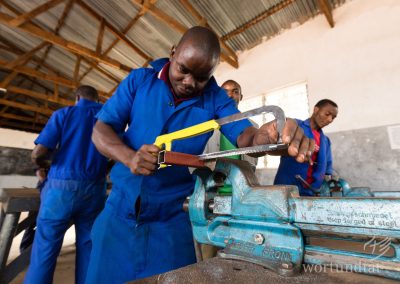 Precision work has to be learnt. 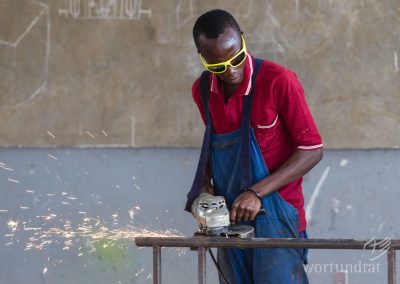 No other training facility in the surrounding area offers as much as KIUMA. 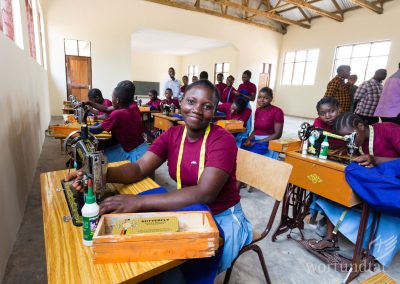 In rural regions, most people are still peasant farmers. Jobs using manual skills increase the possibilities of earning an income. 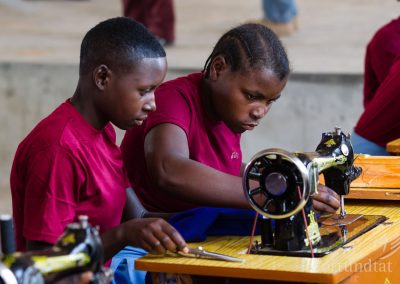 ung people in the region can always learn a little money from sewing and tailoring. 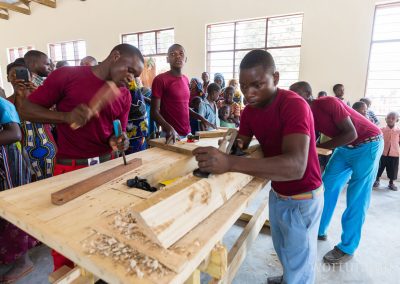 In the community centres in the villages, training is also a means of getting young people off the streets. 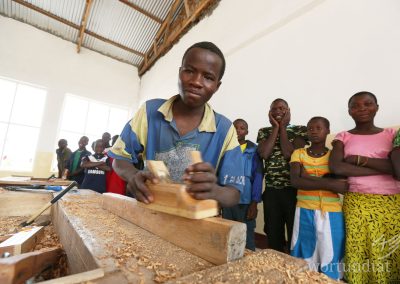 KIUMA has set up several community centres in the area around KIUMA. Manual skills are taught here too. 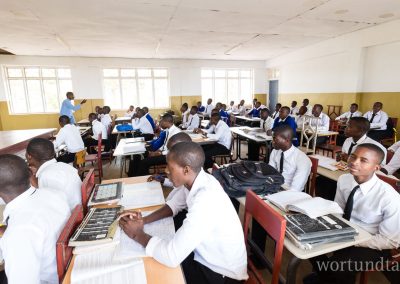 The school uniforms are provided by the boarding school. The students have to wash them themselves. 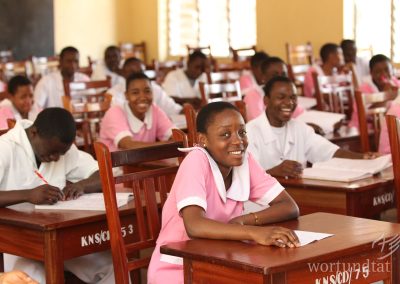 The students from the nursing school initially work for a time in the KIUMA Hospital after training. 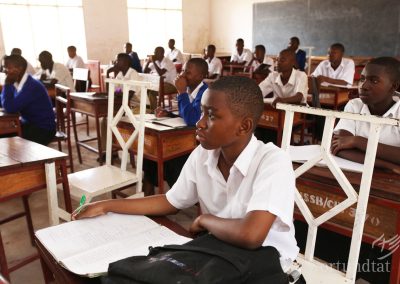 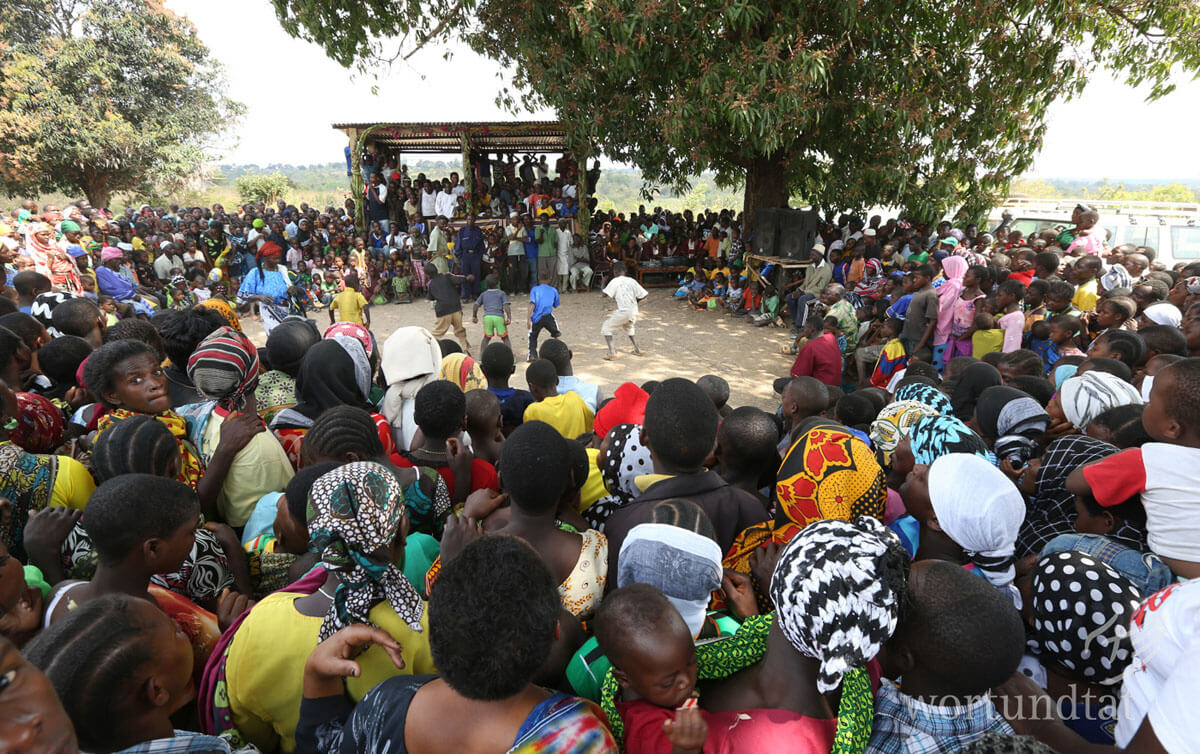 At the opening of a Centre of Hope, the whole village gathers to celebrate.

Centres of Hope – Slowing down the rural exodus

In the remote south of TANZANIA there are hardly any attractive life prospects for young people. Those who would like to develop and use their own potential have little choice other than to leave the region for the city. The Centres of Hope supported by wortundtat are helping to slow the flight from the countryside. Various basic manual skills are taught in the community facilities. Fellowship can be enjoyed and futures can be planned, to some extent. At the same time, the whole village gains: A pool of people with new skills begins to grow. Their knowledge benefits the village community. Additional sources of income are created alongside small-scale agriculture. The region develops along with its inhabitants. 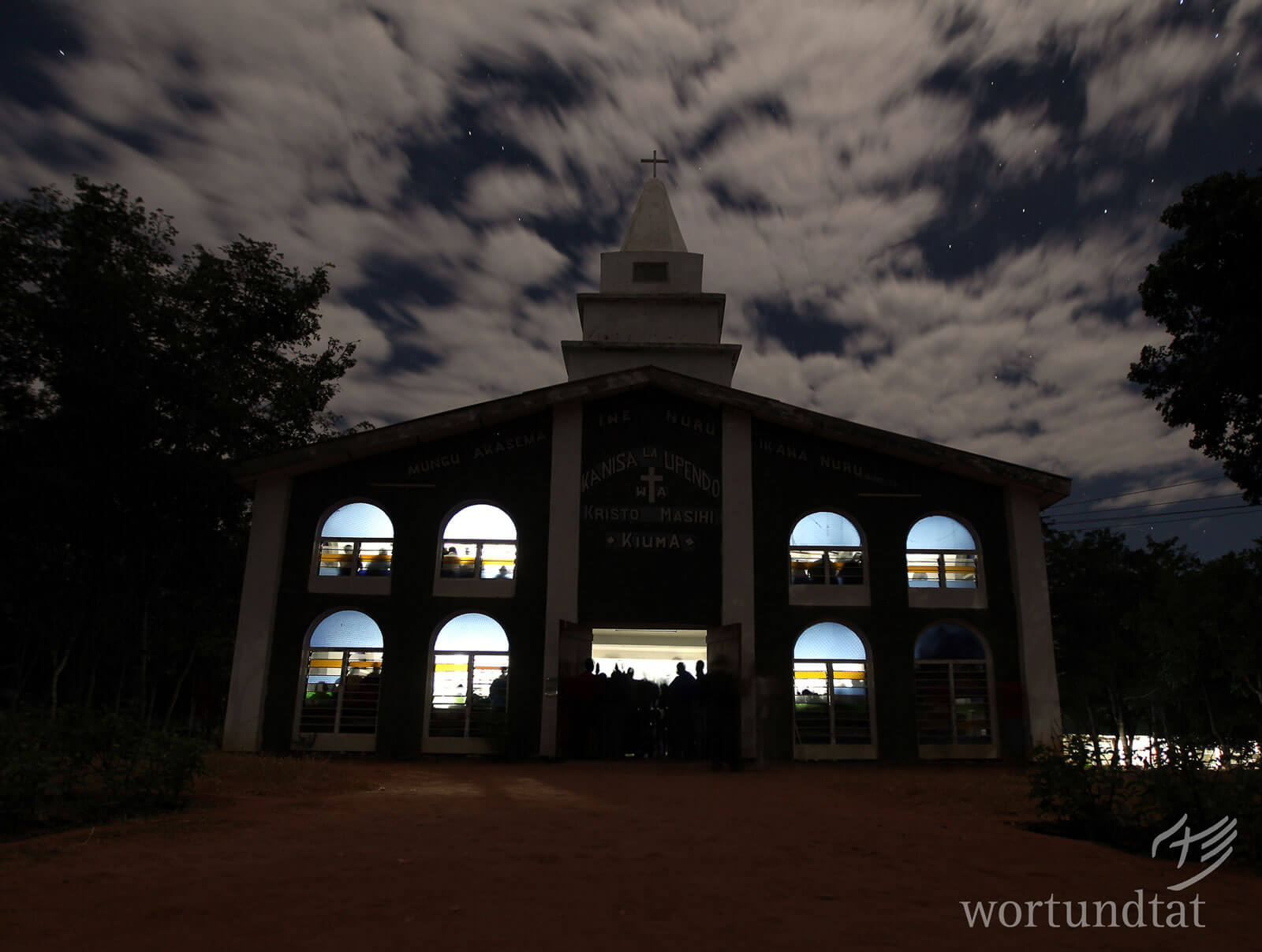 The church building on the KIUMA site, where the faithful hold services.

Latest reports from our project in Tanzania 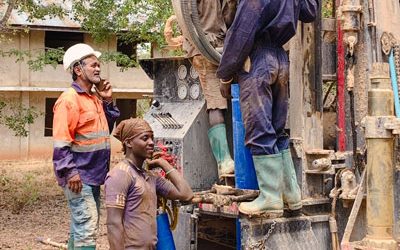 In the future, three new wells will supply the facility that wortundtat supports in Tanzania. The wells used so far were no longer reliable enough. A new well is needed for a new project.

END_OF_DOCUMENT_TOKEN_TO_BE_REPLACED 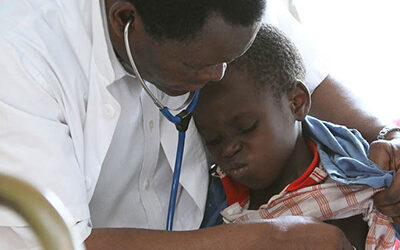 Your donation of €16 a month or €576 over three years makes it possible to train doctors in the south of Tanzania.

END_OF_DOCUMENT_TOKEN_TO_BE_REPLACED 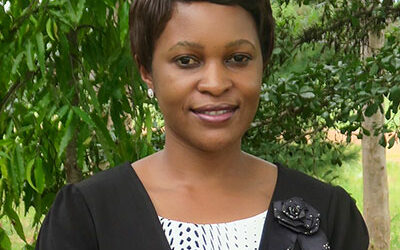 Becoming a teacher in Tanzania

Clara John Soko could probably have become a teacher anywhere in Tanzania. She chose the remote south of the country.